Log in using one of your preferred sites
Close Panel X 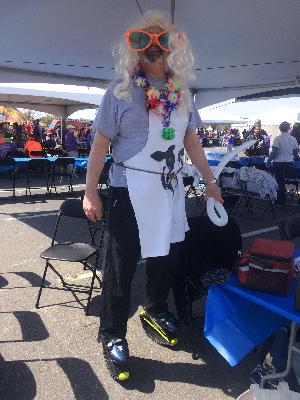 Shalom Y'all
Every year I choose an item to highlight my reasoning behind participating in the annual Hunger Walk.

This year’s theme is, unfortunately, a repeat “IT’S STILL NOT OVER.”

What’s not over? Well..although the economy is taking a turn for the better and the unemployment rate is lower hunger still exists…BIG TIME…and specifically still exists in Metro Atlanta.

Each year the Federation’s HW committee is educated about some of the local programs that are engaged in food insecurity. We heard from an organization that serves the middle class…in Sandy Springs and Dunwoody…no less! They advised that they are serving more clients now than ever before!

The Food Bank itself echoes the situation simply by the amount of goods they moved in 2016 vs 2017 …UP 15%.. to 72 tons provided. This correlates to 7 more million meals served! During the years from 2008 through 2017 the tonnage has more than doubled!

Who are the main beneficiaries? The elderly and the kids. How is this possible if the economy is on the upturn? Could it be the types of new jobs being generated, the length of time needed to catch up from the recession, or something else? I do not have the answer. I can only advise that the need absolutely still exists….NO DOUBT ABOUT IT!!

The Food bank has a new goal that they have asked us to assist in achieving. By the year 2025 they want all who are in need of food to be able to get it…theoretically ending hunger as we know it.

As has been the case since 2004 the entire Frohlich family, representing Congregation Etz Chaim, in East Cobb, are looking forward to participating in this wonderful annual event.

PLEASE REMEMBER THAT MOST OF THE FUNDS RAISED BY THE JEWISH COMMUNITY GOES TO, PREDOMINANTLY, JEWISH FAITH BASED ORGANIAZTIONS.

I END THIS DIATRIBE BY REQUESTING THAT ALL WHO CAN PARTICIPATE IN SOME FASHION DO SO….THE AMOUNT OF WALKERS/RUNNERS IS ALMOST AS IMPORTANT AS THE QUANTITY OF FUNDS (ALTHOUGH HISTORICALLY THE JEWISH COMMUNITY HAS BEEN ABLE TO RAISE THE MOST. THE GOAL THIS YEAR IS 100K)
LET’S MAKE THIS YEAR’S WALK THE BEST !

If you think this page contains objectionable content, please inform the system administrator.